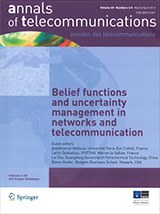 Belief functions in telecommunications and network technologies: an overview

Abstract In the last few years, evidence theory, also known as Dempster-Shafer theory or belief functions theory, have received growing attention in many fields such as artificial intelligence, computer vision, telecommunications and networks, robotics, and finance. This is due to the fact that imperfect information permeates the real-world applications, and as a result, it must be incorporated into any information system that aims to provide a complete and accurate model of the real world. Although, it is in an early stage of development relative to classical probability theory, evidence theory has proved to be particularly useful to represent and reason with imperfect information in a wide range of real-world applications. In such cases, evidence theory provides a flexible framework for handling and mining uncertainty and imprecision as well as combining evidence obtained from multiple sources and modeling the conflict between them. The purpose of this paper is threefold. First, it introduces the basics of the belief functions theory with emphasis on the transferable belief model. Second, it provides a practical case study to show how the belief functions theory was used in a real network application, thereby providing guidelines for how the evidence theory may be used in telecommunications and networks. Lastly, it surveys and discusses a number of examples of applications of the evidence theory in telecommunications and network technologies.

A second-order Markov model to synchronize a quasi-chaotic sequence:
application of synchronization and decoding problem with belief propagation

Abstract The use of chaotic codes in transmission systems presents many advantages, not only in term of security, but also to combat multi-path propagations and to allow multiple access. Nevertheless, the main problem of communication with chaos is the design of an experimental and real-time synchronization decoder between transmitter and receiver. In this paper, we suggest to use the belief propagation algorithm as a new approach for synchronizing quasi-chaotic signals. In this approach, the transmitter contains a digital chaotic oscillator which is perturbed by the information signal. The receiver consists in a dual system augmented with a belief propagation processing, whose aim is to recover the information signal. We suppose that the channel is Gaussian and synchronization is forced in a first step. Once synchronization is achieved, the information signal modulated the chaotic system and is transmitted on the Gaussian channel. An adaptative belief propagation algorithm is processed to recover the signal information.

Abstract An accurate identification of Internet traffic of different applications is highly relevant for a broad range of network management and measurement tasks, including traffic engineering, service differentiation, performance monitoring, and security. Traditional traffic identification approaches have become increasingly inaccurate due to restrictions of port numbers, protocol signatures, traffic encryption, and etc. In this paper, a new traffic identification approach based on multifractal analysis of wavelet energy spectrum and classification of combined neural network models is proposed. The proposed approach is able to achieve the identification of different Internet application traffic by performing classification over the wavelet energy spectrum coefficients that were inferred from the original traffic. Without using any payload information, the proposed approach has more advantages over traditional methods. The experiment results illustrate that the proposed approach has satisfactory identification results.

(1) Université Lille Nord de France, France
(2) UArtois, France
Abstract This article introduces a high-level system using belief functions for exchanging and managing imperfect information about events on the road in vehicular ad hoc networks. The main purpose of this application is to provide the most reliable information for the driver from multiple messages received informing the driver about events on the roads. This system and some variants are tested using a MATLAB™ simulator. An implementation with Android smartphones using a Bluetooth technology to exchange the messages is also introduced.

Abstract One of the important aspects of a mobile ad hoc network (MANET) is the limitation of the amount of available energy and the network lifetime. The tremendous amount of using mobile nodes in wireless communication medium makes energy efficiency a fundamental requirement for MANETs. In this paper, we propose a novel energy aware clustering algorithm for the optimized link state routing (OLSR) routing protocol. This algorithm takes into account the node density and mobility and gives major improvements regarding the number of elected cluster heads. Our objective is to elect a reasonable number of cluster heads that will serve for hierarchical routing based on OLSR. The proposed algorithm aims to increase the network lifetime by considering the ad hoc residual energy while taking routing decisions. It also optimizes the delay of carried flows by adopting a selective forwarding approach based on a hierarchical routing model.

Abstract In this paper, we propose a new Quality Link Metric (QLM), “Inverse Expected Transmission Count (InvETX),” in Optimized Link State Routing (OLSR) protocol. Then, we compare performance of three existing QLMs which are based on loss probability measurements: Expected Transmission Count (ETX), Minimum Delay (MD), and Minimum Loss (ML) in Static Wireless Multi-hop Networks (SWMhNs). A novel contribution of this paper is enhancement in conventional OLSR to achieve high efficiency in terms of optimized routing load and routing latency. For this purpose, first we present a mathematical framework, and then to validate this frame work, we select three performance parameters to simulate default and enhanced versions of OLSR. The three chosen performance parameters are throughput, Normalized Routing Load, and End-to-End Delay. From the simulation results, we conclude that adjusting the frequencies of topological information exchange results in high efficiency.

Abstract In wireless sensor network-based event detection approaches, when the decision is taken based on the measurements of sensors, sensor-fault and noise-related measurement error should be taken into account. Using Bayesian approach to form a judgment is problematic without additional information or assumptions (for example, the difficulty of knowing prior probabilities in practice). In making the final decision using the majority decision rule (as well as the k-out-of-n rule), measurement of every sensor is considered as fully reliable. However, due to sensor fault and environmental noise, the preciseness of all measurements may not be guaranteed in real-life applications. This paper presents a Dempster–Shafer theory of evidence-based structural health monitoring protocol using wireless sensor networks that overcome these limitations. Our proposal effectively discounts the unreliable observer’s (sensor’s) measurements. Extensive simulations show significant improvement in terms of detection accuracy as compared to other well-known approaches.