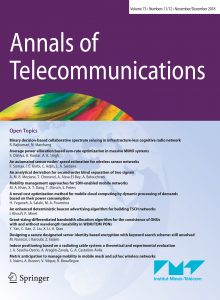 Abstract Collaborative spectrum sensing (CSS) plays a vital role in achieving accurate spectrum sensing results in a cognitive radio network (CRN). However, CSS in infrastructure-less CRNs is a challenging task as there is no central authority which aggregates individual sensing reports to take a final decision. Hence, it becomes the responsibility of each node to aggregate sensing reports of other nodes to take the final decision. Towards this end, we present two collaborative spectrum sensing techniques for infrastructure-less CRN based on message passing. The first technique is distributed binary decision-based CSS (DBCSS), in which a node broadcasts its sensing report and uses the binary decisions of its h-hop neighbors for making its final sensing decision. The second one is distributed cluster-based CSS (DCCSS) in which a cluster head consolidates the sensing reports in its cluster into a message and broadcast this message in the network. We support the validity of the proposed schemes through extensive simulation results.

Abstract This paper exploits variations in the average channel gains in multi-cell multi-user massive multiple input multiple output (MIMO) systems. An average transmit power-control-based sum-rate optimization scheme is presented for the uplink of the system. The matched filtering (MF) and the zero forcing (ZF) processors are considered with perfect and imperfect channel state information at receiver (CSIR) under frequency flat Rayleigh fading channel. An average power-control-based system model is constructed for analyzing the sum-rate and formulating an optimization problem. A discrete level combinatorial optimization is performed for MF and ZF sum-rate under perfect and imperfect CSIR. The numerical results show a significant improvement in the sum-rate and power consumption. A low complexity algorithm for numerical optimization of the sum-rate is proposed. The performance of algorithm is quantified with different scenarios including different number of users, macro cells, and micro cells with low and high inter-cell interference powers. The evaluation results show that the improvement in sum-rate and energy efficiency increases with inter-cell interference power and the number of MTs.

Abstract Wireless sensor networks (WSNs) have become more and more notorious thanks to their numerous advantages. But, some of the WSN weaknesses, inherent to sensor nodes’ particularities (low memory, finite battery, etc.), make these networks vulnerable especially for some particular scenarios such as nodes’ mobility which alters the correct network functioning and completely compromises its normal behavior. Thus, we propose in this paper a novel mobility prediction model called the general Bayesian-based mobility prediction (G-BMP) model where sensor nodes’ speed values are derived based on a Bayesian inference paradigm and upon the occurrence of “expired links” and “non-expired links” events. Moreover, to make the implementation of G-BMP possible on sensor devices, we introduce some simplifications during the computation and the transmission of speed distributions. The evaluation of G-BMP using python illustrates the accuracy of the model in deriving the correct speed values in a timely manner. We also compare the performance of G-BMP to the native BMP model that only considers the expired link events when updating the nodes’ speed distributions. The results show that the convergence to real speed values within sensor nodes is faster with G-BMP than that with the native BMP model. In addition, all the simulations illustrate the accuracy of the simplifications used to reduce the overhead generated by the frequent exchange of speed distributions.

An analytical derivation for second-order blind separation of two signals

Abstract In this paper, we propose analytical formulas that involve second-order statistics for separating two signals. The method utilizes source decorrelation and correlation function diversity. In particular, the proposed SOBAS (second-order blind analytical separation) algorithm differs from the ASOBI (analytical second-order blind identification) algorithm in that it does not require prior knowledge or estimation of the noise variance. Computer simulations demonstrate the effectiveness of the proposed method.

Abstract The evolving network technologies aim at meeting the envisioned communication demands of future smart cities and applications. Although software-defined networking (SDN) enables flexible network control, its applicability to mobile networks is still in its infancy. When it comes to introducing the SDN vision to mobile networks, handling of wireless events and mobility management operations stand out as major challenges. In this paper, we study the scalability issues of SDNized wireless networks, specifically those relevant to mobility management. We design and implement different mobility management approaches in SDNized wireless networks and investigate the impact of various system variables on the overall handover delays. We also study the improvements in handover delays: (i) when a proposed proactive mobility management algorithm is implemented; (ii) when the controller delegates partial control of mobility management to the forwarding entities. For the implementation of the proposed approaches on the OpenFlow network, the paper also suggests potential extensions to the OpenFlow protocol. The contributed approaches are validated on a full-scale demonstrator, with results showing that proactive outperforms reactive and that the delegated control approach performs better than proactive for smaller topology sizes. Furthermore, a proposal for LTE X2-specific control delegation is discussed as a use case.

Abstract Mobile cloud computing (MCC) is an emerging technology that is introduced to combat the existing limitations in mobile computing such as constrained energy and storage. MCC enables mobile users to perform their tasks in the operator cloud and benefit from the offered services. On the other hand, operators are required to decrease their costs to stay in the competitive market. In this paper, we propose a method to reduce the cost of power consumption and increase the profit of 4G/5G network operators delivering MCC services. We propose an online method that is based on dynamic processing of mobile users’ demands based on their power consumption in the cloud, called Dyn-PDPC. In this algorithm, the power consumption of demands is estimated based on event counters, and demands are classified and processed accordingly. Unlike the offline methods, the proposed online method can be implemented with the existing information and there is no need for prior knowledge. We also present an extended version of Dyn-SP algorithm, in which we had an unrealistic assumption about the energy consumption of demands. In Dyn-PDPC, by using control parameters, when the electricity price is low, demands with high power consumption are processed, and then the low power-consumption demands are processed. Similarly, when the electricity price is high, demands with low power consumption are processed at first. Simulation results demonstrate that the proposed algorithm has more accuracy, and more reduction in long-term cost compared to other online methods in MCC networks.

Abstract In this paper, we focus first on the time needed by a node to join a Time Slotted Channel Hopping (TSCH) network, this time is called joining time. Second, we are also interested in the network building time. Since the data generated by a sensor node remain unavailable as long as this node has not yet joined the wireless sensor network, these times are of prime importance for applications having strong latency requirements on data gathering. The joining time depends on the beacon advertising policy that has been left unspecified by the standard. The contribution of this paper is triple. First, we propose an Enhanced Deterministic Beacon Advertising algorithm, called EDBA, that ensures a collision-free advertising of beacons and minimizes the average joining time. Second, we model the behavior of a joining node by a Markov chain, validated by NS3 simulations, and compute the average joining time. Third, we compare the performance of EDBA with this of MBS, considered as the best beacon advertising algorithm in the literature.

Abstract Adopting the pay-as-you-grow approach to upgrade passive optical network (PON) facilities by WDM technology insures the smoothness of the upgrade, and also results in the coexistence of wavelength-fixed/tunable optical network units (ONUs) in WDM/TDM PONs. Dynamic bandwidth allocation (DBA) is the key to support such coexistence of heterogeneous ONUs. Thus, DBA is also the key to support the smooth evolution of PONs. To more fairly coordinate the bandwidth allocation among the coexisting heterogeneous ONUs, a differentiated grant sizing (DGS) scheme is proposed. In DGS, not only the fairness between the wavelength-fixed/tunable ONUs but also the fairness between the lightly/heavily loaded ONUs is taken into account. To further carry out load balancing among wavelengths, a grant scheduling scheme is also proposed to cooperate with the grant sizing scheme. In the grant scheduling scheme, a measure of the ONUs’ flexibility is given, and then the least flexible job first rule (LFJF) is adopted for joint wavelength and time-slot assignment. Finally, to demonstrate the effectiveness of the proposed algorithm, a series of comparative analyses is conducted based on simulation experiments.

Abstract There exist only a few papers in the literature which target the problem of “proposing a secure designated server identity-based encryption with keyword search scheme.” In this paper, we prove that they all suffer from security issues, and therefore, this challenging problem still remains open.

Indoor positioning based on a radiating cable system: a theoretical and experimental evaluation

Abstract A positioning system in confined environments is not only used for entertainment, but also for other applications, such as security and safety, where it has become a priority. On the other hand, radiating cables have been successfully used to provide coverage in these harsh environments. This paper presents the evaluation of an alternative use of radiating cables for indoor positioning. Specifically, the mean delay and received power are used as measurable variables for position determination, using the location error for evaluating the goodness of such methods in two different scenarios. The first scenario is inside a tunnel where a theoretical evaluation is carried out by considering the cable as an array of magnetic dipoles. For the second scenario, the radiating cable is considered to be inside a building where a theoretical and an experimental evaluation is performed. The experimental demonstration is based on wideband measurements of channel frequency responses inside the building. Channel impulse responses are generated considering the environment, and various channel characteristics are used for positioning, i.e., decreased signal strength and multipath propagation. Fingerprinting is used to determine position, and its implementation promises to be a feasible option for indoor positioning, specifically in venues where traditional positioning systems do not work properly and the radiating cable characteristics can be exploited, i.e., corridors, mines, production lines in factories, airports, tunnels, etc.

Abstract In mobile ad hoc networks (MANETs), node mobility management is performed by the routing protocol. It may use metrics to reflect link state/quality. But, the delay between measures of the link quality and its integration in the route computation is very detrimental to the mobility management. Consequently, routing protocols may use lossy links for a few seconds leading to a significant performance deterioration. In this paper, we propose a new routing metric technique calculation which aims at anticipating link quality. Basically, the idea is to predict metric values a few seconds in advance, in order to compensate the delay involved by the link quality measurement and their dissemination by the routing protocol. Our technique is based on measurements of signal strength and is integrated in two classical routing metrics: ETX (expected transmission count) and ETT (expected transmission time). Validations are performed through both simulations and a testbed experimentation with OLSR as routing protocol. NS-3 simulations show that our metric may lead to a perfect mobility management with a packet delivery ratio of 100%. Experiments on a testbed prove the feasibility of our approach and show that this technique reduces the packet error rate by a factor of 3 in an indoor environment compared to the classical metrics calculation.