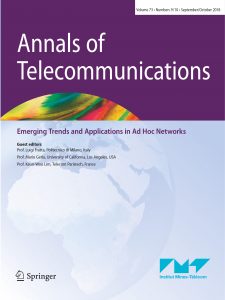 Abstract Delay-tolerant networks (DTNs) are sparse mobile ad hoc networks, in which there is typically no complete path between the source and destination. Anycast is an important group communication paradigm for numerous DTN applications such as resource discovery and information exchange in emergency or crisis situations. Unlike unicast and multicast, which have been studied extensively in DTNs, few prior works have addressed the DTN anycast routing problem. Furthermore, they often ignore the time constraint and assume long contact durations in formulating the relay selection strategy. In this paper, we study a single-copy time-constrained anycast (TCA) routing under short contact duration. We address two key issues: (1) to which next hop relay node should messages be forwarded and (2) in which order should messages be forwarded. To reduce the transmission cost, we select relay nodes from both current and past contacts based on the one-hop and two-hop delivery probabilities, respectively. We derive the delivery probability from the distribution of inter-contact time and contact duration time. We address the case of exponential and Pareto distribution, which are the most popular assumptions in literature. For the message scheduling, messages with the highest delivery probability are prioritized to be transmitted first. Extensive simulation results based on Cabspotting and MIT Reality traces show that our scheme can achieve up to 29% higher delivery rate, 24% lower delay, and 36% lower transmission cost compared to other anycast routing strategies.

Abstract When two opportunistic network peers encounter, utility functions are generally employed to select the messages that have to be exchanged, with the purpose of maximizing message delivery probability and reduce congestion. These functions compute weighted sums of various parameters, like centrality, similarity, and trust. Most of the existing solutions statically compute the weights based on offline observations and apply the same values regardless of a node’s context. However, mobile networks are not necessarily constant in terms of behavior and characteristics, so the classic approach might not be suitable. The network might be split into sub-networks, which behave differently from each other. Thus, in this paper, we show that, by dynamically adjusting the behavior of a node based on its context, through the adjustment of the utility function on the fly, the opportunistic forwarding process can be improved. We show that nodes behave differently from each other and have different views of the network. Through real-life trace-based simulations, we prove that our solution is feasible and is able to improve an opportunistic network’s performance from the standpoint of hit rate, latency, and delivery cost.

Abstract Vehicular Ad Hoc Networks (VANETs) are characterized by intermittent connectivity, which leads to failures of end-to-end paths between nodes. Named Data Networking (NDN) is a network paradigm that deals with such problems, since information is forwarded based on content and not on the location of the hosts. In this work, we propose an enhanced routing protocol of our previous topology-oblivious Multihop, Multipath, and Multichannel NDN for VANETs (MMM-VNDN) routing strategy that exploits several paths to achieve more efficient content retrieval. Our new enhanced protocol, i mproved MMM-VNDN (iMMM-VNDN), creates paths between a requester node and a provider by broadcasting Interest messages. When a provider responds with a Data message to a broadcast Interest message, we create unicast routes between nodes, by using the MAC address(es) as the distinct address(es) of each node. iMMM-VNDN extracts and thus creates routes based on the MAC addresses from the strategy layer of an NDN node. Simulation results show that our routing strategy performs better than other state of the art strategies in terms of Interest Satisfaction Rate, while keeping the latency and jitter of messages low.

μDTNSec: a security layer with lightweight certificates for Disruption-Tolerant Networks on microcontrollers

Abstract In Delay/Disruption-Tolerant Networks, man-in-the-middle attacks are easy: due to the store-carry-forward principle, an attacker can simply place itself on the route between source and destination to eavesdrop or alter bundles. This weakness is aggravated in networks, where devices are energy-constrained but the attacker is not. To protect against these attacks, we design and implement μDTNSec, a security layer for Delay/Disruption-Tolerant Networks on microcontrollers. Our design establishes a public key infrastructure with lightweight certificates as an extension to the Bundle Protocol. It has been fully implemented as an addition to μDTN on Contiki OS and uses elliptic curve cryptography and hardware-backed symmetric encryption. In this enhanced version of μDTNSec, public key identity bindings are validated by exchanging certificates using neighbor discovery. μDTNSec provides a signature mode for authenticity and a sign-then-encrypt mode for added confidentiality. Our performance evaluation shows that the choice of the curve dominates the influence of the payload size. We also provide energy measurements for all operations to show the feasibility of our security layer on energy-constrained devices. Because a high quality source of randomness is required, we evaluated the random number generators by the AT86RF231 radio, its successor AT86RF233, and one based on the noise of the A/D converter. We found that only AT86RF233 provides the required quality.

Abstract The user experience on watching videos transmitted by a flying ad hoc networks (FANETs) should always be satisfactory even under influence of topology changes in reason of the unmanned aerial vehicles (UAVs) mobility. However, one of the main challenges to route packets in FANETs is how to mitigate the effects of UAV mobility to preclude communication flaws, delays, and void area, which hence increase the packet loss over video transmissions. In this way, routing protocols require an efficient relay placement service to find out the ideal location for UAVs that act as relay nodes, and thus mitigating the effects of UAV movements on the quality of experience (QoE) of transmitted videos. In this article, we introduce a massive analysis of our proposed relay placement mechanism, called MobiFANET, in order to diagnose the impact of videos with different characteristics on the QoE and route failure. We also present detailed information about the MobiFANET mechanism, as well as the contributions of each component on the routing performance. Simulation results show how MobiFANET works jointly with a routing protocol for satisfactory multimedia transmission, where it provides better QoE and a reduction of the number of route failures compared to existing routing protocols.

Abstract Unmanned aerial vehicles (UAVs) are utilized in the surveillance and reconnaissance system of hazardous locations by utilizing the feature that they can freely move away from space constraints. Furthermore, the application scope of the UAVs expanded not only for simple image data collection but also for analysis of complex image data without human intervention. However, mobile UAV systems, such as drone, have limited computing resources and battery power which makes it a challenge to use these systems for long periods of time. In this paper, we propose an AOM, Adaptive Offloading with MPTCP (Multipath TCP), architecture for increasing drone operating time. We design not only the task offloading management module via the MPTCP to utilize heterogeneous network but also the response time prediction module for mission critical task offloading decision. Through the prototype drone implementation, we show the AOM reduces the task response time and increases drone operation time.

Abstract To give the complete description of an environment or to take a robust decision, a number of observations are collected and combined from the multiple sensor nodes. The process of combining and analyzing the observations is called multisensor data fusion. The fusion is used to produce more consistent, accurate, and useful information than that provided by any individual sensor node. For efficiency, data fusion is performed on the sensed sample collected by sensor nodes. However, fusion on the network path parameters is also essential to select an appropriate forwarding route for sending the data. In addition, to increase the lifetime of a network, an efficient strategy is needed in order to select a cluster head node. Therefore, in this paper, we propose a multisensor data fusion (MDF) strategy which performs fusion on collected network parameters for the selection of an appropriate path with collaboration of Fuzzy-based cluster head selection (FBCHS). Jointly, we named the strategy as the MDF-FBCHS strategy for IoT-oriented WSN. Extensive simulations were made, and related results showed that our proposed scheme has better performance compared with other schemes in our simulated scenarios.

Abstract This paper proposes a reconfigurable remote radio head (RRH) software and hardware architecture and presents the results of its implementation. The implemented RRH has been designed for a centralized architecture super base station that facilitates the integration of 2G, 3G, and 4G ground base stations and geosynchronous equatorial orbit (GEO) satellite gateway stations. The reconfigurable RRH is a primary aspect of the system. By modifying the programmable software configuration from the perspective of software-defined radio, the RRH can support multiple frequency allocations. The RRH is composed of radio frequency (RF) modules, intermediate frequency (IF) modules, and some of the physical layer functions. The development of a reconfigurable IF module is emphasized. A filter-bank multiplexing technique has been employed for the IF module, which reduces the use of hardware resources. To this end, we experimentally evaluated the main key performance indicators (KPIs) of the RRH. The experimental results demonstrate that the proposed design attains the goal of reducing hardware costs and improving system flexibility and stability.

Abstract In this paper, based on the imperfect channel state information (CSI), a cross layer design (CLD) scheme is developed for distributed antenna system (DAS) by combining adaptive modulation (AM) at the physical layer and automatic repeat request (ARQ) at the data link layer. The performance of DAS with CLD is investigated over composite fading channel which considers large-scale path loss and small-scale Rayleigh fading. With the performance analysis, the probability density function of the estimated signal-to-noise ratio (SNR) is derived, and then, the switching thresholds under a target packet error rate constraint are further derived. According to these results, and using numerical calculation, the closed form analytical expressions of average packet error rate and spectrum efficiency of DAS with CLD are, respectively, achieved, which will provide better evaluation way for the DAS performance. To decrease the performance loss caused by the conventional single estimation in the presence of imperfect CSI, the multi-estimation method is proposed to increase the system performance by exploiting previous channel estimation information. Numerical results corroborate our theoretical analysis, and the simulation is in consistence with the theoretical result. Moreover, the system performance can be increased by decreasing the estimation error and/or path loss. Especially, the multi-estimation method can enhance the performance effectively and enable the system to tolerate large estimation errors.

Abstract Today, a large number of cost-saving and energy-efficient applications are enabled by wireless sensor and actuator networks (WSANs). Usually, these solutions have serious connectivity problems in scenarios where other wireless technologies are co-located sharing the frequency spectrum (e.g., industrial shop-floors). To cope with this issue, the concept of multi-radio (MR) has been introduced, which promotes the simultaneous use of multiple radio communication interfaces, leveraging their different characteristics, to improve the overall system performance and reliability. The proposed approach based on cognitive algorithm considers two wireless technologies operating at the 2.4-GHz frequency band, namely Wi-Fi and 6LoWPAN, and provides a concrete implementation of the system using a real test-bed industry scenario. The solution provides a reliable communication infrastructure for manufacturing processes, firstly combining the properties of several physical layer standards and secondly providing the ability to recover from temporary network failures by switching from a communication channel to another one.