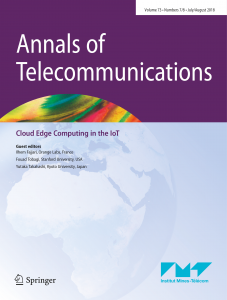 Cloud Edge Computing in the IoT

Cloud-based federated identity for the Internet of Things

Abstract The Internet of Things (IoT) has significant security and privacy risks. Recent attacks have shown that not only are many IoT devices at risk of exploit, but those devices can be successfully used to attack wider systems and cause economic damage. Currently, most devices connect to a cloud service that is provided by the manufacturer of the device, offering no choice to move to more secure systems. We outline a proposed model for IoT that allows the identity of users and devices to be federated. Users and devices are issued with secure, random, anonymised identities that are not shared with third parties. We demonstrate how devices can be connected to third-party applications without inherently de-anonymising them. Sensor data and actuator commands are federated through APIs to cloud services. All access to device data and commands is based on explicit consent from users. Each user’s data is handled by a personal cloud instance providing improved security and isolation, as well as providing a trusted intermediary for both devices and cloud services. We demonstrate this model is workable with a prototype system that implements the major features of the model. We present experiment results including performance, energy usage, capacity and cost metrics from the prototype. We compare this work with other related work and outline areas for discussion and future work.

Abstract Internet Engineering Task Force (IETF) has recommended the use of routing protocol for Low Power and Lossy Network (RPL) for Internet Protocol version 6 (IPv6) enabled Internet of Things. However, RPL is vulnerable to internal and external attacks in a network. A malicious node in a rank attack, which is consumed by its child nodes, advertises false rank information. This consequently causes the selection of a malicious node as preferred parent for routing information to the sink node. Given the widespread application of RPL protocol in smart homes, smart cities, and the smart world, it is imperative to address this problem. In this paper, a novel Sink-based intrusion detection system (SBIDS) for the detection of rank attack in RPL is presented. SBIDS has less computational overhead as all detection processes take place at the sink node, which saves network resources. Through a comprehensive simulation analysis, it is shown that the proposed SBIDS provides high detection rate.

A full stack for quick prototyping of IoT solutions

Abstract The paper presents a novel approach for prototyping interconnected products belonging to the Internet of Things context. The proposed solution aims at merging the benefits provided by monolithic vertical approaches (where all the IoT elements are pre-selected, from the hardware to the cloud) with those of horizontal solutions (that leave the freedom to select the single components and write the integration code). The proposed solution allows to speed up the prototyping process and lets the developers focus on coding the product behaviors rather than solving customization issues. The advantages of the proposed solution goes beyond the prototyping, as the prototype can be easily converted into an industrially viable solution. The paper ends with a real case application where the proposed stack is used for the development of an IoT unit that converts industrial refrigerators into smart connected systems.

Abstract Cognitive radio has emerged as a promising candidate solution to improve spectrum utilization in next-generation wireless networks. A crucial requirement for future cognitive radio networks is the wideband spectrum sensing, which allows detecting spectral opportunities across a wide frequency range. On the other hand, the Internet of Things concept has revolutionized the usage of sensors and of the relevant data. Connecting sensors to cloud computing infrastructure enables the so-called paradigm of Sensing as a Service (S2aaS). In this paper, we present an S2aaS architecture to offer the Spectrum Sensing as a Service (S3aaS), by exploiting the flexibility of software-defined radio. We believe that S3aaS is a crucial step to simplify the implementation of spectrum sensing in cognitive radio. We illustrate the system components for the S3aaS, highlighting the system design choices, especially for the management and processing of the large amount of data coming from the spectrum sensors. We analyze the connectivity requirements between the sensors and the processing platform, and evaluate the trade-offs between required bandwidth and target service delay. Finally, we show the implementation of a proof-of-concept prototype, used for assessing the effectiveness of the whole system in operation with respect to a legacy processing architecture.

Abstract In recent years, applications such as Internet-of-Things has proliferated the Internet to a great extent. Such applications derive data from a significant number of smart sensors sensing information from the environment. Due to an extensive data footprint, the demand for cloud services to process this data has also increased. However, traditional centralized cloud model requires offloading data from these sensors over a network which induces significant network delay on these applications. Several architectural abstractions of cloud, such as Fog and Edge, have been proposed to localize some of the processing near the sensors and away from the central cloud servers. In this paper, we propose Edge-Fog cloud which distributes task processing on the participating cloud resources in the network. We develop the Least Processing Cost First (LPCF) method for assigning the processing tasks to nodes which provide the optimal processing time and near-optimal networking costs. We further provide an energy-efficient variant of LPCF, i.e., eLPCF algorithm, which optimizes energy usage while calculating task deployment in Edge-Fog cloud. We evaluate both LPCF and eLPCF in a variety of scenarios and demonstrate its effectiveness in finding the processing task assignments.

A QoS-aware hybrid data aggregation scheme for Internet of Things

Abstract Quality of service provisioning for real-time data such as audio and video in large Internet of Things networks is considered to be a challenging issue. In order to maintain desirable service quality of the sensed data from the environment, data aggregation-based schemes are highly used. Such schemes gather and aggregate data packets in an efficient manner so as to reduce power consumption, network overhead, and traffic congestion, and to increase network lifetime, data accuracy, etc. In this paper, a hybrid Quality of service-Aware Data Aggregation (QADA) scheme is proposed. The proposed scheme combines some of the interesting features of the cluster and tree-based data aggregation schemes while addressing some of their important limitations. Simulation results show that QADA outperforms cluster and tree-based aggregation schemes in terms of power consumption, network lifetime, available bandwidth utilization, and transmission latency.

Abstract Mobile edge computing (MEC) offers cloud capabilities and service environment for Internet-of-Things (IoT) applications at the edge of the mobile network. New services for a specific set of IoT application programming interfaces (APIs) of diversified industry verticals can efficiently be deployed. As the set of APIs based on the IoT continues to thrive, reliance on the underlying cloud computing to deliver real-time and context-based services is also prominent in MEC. Due to the increased level of mutual interference of IoT APIs, the complexities are also multiplied. The set of IoT APIs competes for available resources within heterogeneous clouds (HCs). It is further aggravated by the unprecedented number of connected devices. We are presenting a cognitive agent (CA)-oriented approach to proactively subordinate IoT APIs with HCs. This paper contributes to establish an empirical multi-agent cognitive architecture framework (MCAF) for continuous transition of IoT APIs. We identified an adaptable composition method and a classification technique for CAs during this research effort. It introduces rationalization of CA creation, migration, and control. The approach achieves transparency in the heterogeneity and distribution of IoT APIs. It provides dynamism of cloud computing environments. The paper also illustrates the architecture impact analysis with the indicative capabilities of auto-scaling, predictability in HCs’ resource use, and responsiveness and attainment of IoT APIs.

An IEEE 802.11ah-based scalable network architecture for Internet of Things

Abstract IEEE 802.11ah is proven to be a suitable communication standard for Internet of Things. It supports a wide range of modulation and coding schemes (MCSs) along with different data rates. The Restricted Access Windows (RAW)-based channel access mechanism facilitates scalable communication among a large number of devices. However, due to the absence of RAW size adjustment, it fails to optimally utilize the resources in a dynamic network environment. In this paper, we propose a method to estimate the RAW size based on traffic loads and provide relay node support for stations to use different MCSs. The relay nodes dynamically allocate bandwidth to stations belonging to different relay groups. The proposed scheme is seamlessly assimilated into 802.11ah which shows significant performance improvement in terms of throughput and delay.

Abstract This paper shows a proposal for making the price of cloud services clear and subject to optimization. The proposal is tailored to Internet-of-Things (IoT) applications based on big data management. The basic assumption of our analysis is that the emerging IoT applications do not simply make use of the information collected by few sensors. The expected volume of information generated by sensors, the different nature of sensors, the different information delivery techniques, and the variable nature of applications make the system management a real 5-V big data problem. In this paper, we identify the key features that characterize a cloud-based, sensing-as-a-service IoT application, we map each feature into a specific cost function, and we suitably combine these cost functions. This way, we obtain a pricing strategy sufficiently simple for it to be applied in operation, depending on all the identified features, and flexible enough for being updated for any new introduced IoT service in the cloud infrastructure.

Abstract Device-to-Device (D2D) technology underlying the cellular network is an attractive solution for future generation network to increase cellular traffic offloading. When two devices are close enough, D2D communication allows a direct communication between them without the mediation of the cellular base station. However, since D2D communication shares the same uplink cellular network radio resource, D2D communication mode selection remains challenging to limit the mutual interference between D2D and cellular links. In this paper, a new D2D mode selection scheme based on a new criterion is proposed aiming at maximizing the cellular traffic offload while respecting the quality of service of cellular users. More precisely, we introduce a noise rise parameter which takes into account the cellular link distance, the D2D link distance, and user’s required throughput. The D2D links are admitted under the constraint of a certain noise rise threshold. To further enhance the achieved throughput of D2D users while respecting the overall interference level in the network, a new power control algorithm is also proposed. Simulation results show that our proposed mode selection scheme provides a tradeoff between traffic offloading and the overall radio capacity in the network. They also prove that the D2D communication mode is more attractive at the cell edge and when D2D users are close enough to each other. In addition, we show the effectiveness of our proposed power control scheme as compared to both static and Rate-Adaptive Water Filling power allocation schemes.