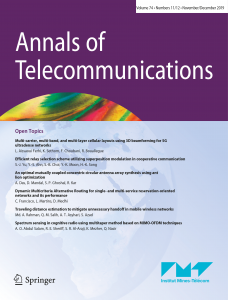 Abstract Three-dimensional (3D) beamforming and higher order sectorization (HOS) represent two fundamental features to boost the capacity of ultradense heterogeneous networks and fulfill the huge data rate requirements for next-generation mobile networks (5G). The capacity gain depends on the antenna pattern, the inter-cell interference (ICI), and the cellular layout whose design is considered as the main step in the life cycle of a cellular network. Indeed, it decides the operational expenditure (OPEX), the capital expenditure (CAPEX), and the long-term quality of service (QOS). In this paper, we propose new multi-carrier, multi-layer, and multi-band cellular layouts. By exploiting the capability of the 3D beamforming as well as the 3D channel model conceived by the third-generation partnership project (3GPP), the layouts comprise macro and virtual small cell (VSC) layers, which are planned based on geolocation data and a user-grouping algorithm. We have demonstrated that the simulation of the new proposed cellular layouts results in a significant coverage enhancement and interference mitigation, as compared to the reference cellular layout which is 3GPP case 1.

Abstract This paper presents an accurate design approach for concentric circular antenna array (CCAA) synthesis to improve the far-field radiation characteristics using a meta-heuristic optimization technique called ant lion optimization (ALO). The far-field radiation pattern is improved with lower side lobe level (SLL) which is essential for the reduction of interference in the entire side lobe regions. The ALO algorithm is a recently proposed evolutionary technique which is applied to determine the optimal sets of current excitation weights and to find the optimal inter-element spacing between the array elements in the 3-ring structure of the CCAA design. In this context, the design examples of two 3-ring CCAAs, one having the set of (4, 6, 8) elements and the other having the set of (8, 10, 12) elements, with and without the centre element, are presented by optimizing the array parameters. The results obtained by using the ALO algorithm–based approach show considerable improvement of SLL with respect to that of the uniform array pattern and those of the methods reported in the recent literature.

Abstract We propose a new Dynamic Multicriteria Alternative Routing (DMAR) method that applies to reservation-oriented networks. DMAR combines a dynamic alternative routing scheme with a periodic update of alternative paths according to a multicriteria algorithm that aims to balance the traffic between traffic flows in single-service networks and also between services in multi-service environments. We conducted extensive simulations to compare the performance of DMAR with that of other reference alternative routing schemes in single- and multi-service networks with several topologies and load scenarios, namely with non-stationary traffic. We show that DMAR efficiently adjusts to traffic changes while often presenting better network performance than the reference alternative routing schemes, particularly in the multicriteria sense.

Abstract Amidst the factors that degrade the performance of a mobile wireless network (MWN), unnecessary handoff is considered to be one of the premier culprits since it aimlessly consumes the network resources. Most of the existing handoff algorithms proposed for MWN suffer from frequent unnecessary handoff as the primary decision of switching network cells is solely based on a single contributing factor, namely the received signal strength (RSS) that approximates the distance between a mobile node and access points. In practice, the RSS may not provide accurate approximation of the true distance as it fluctuates with wireless propagation impairments (such as shadowing, scattering, and reflection), leading to potential incorrect handoff decision within neighboring cells. In this paper, an improved estimation model for instantaneous distance between the mobile node and access point is formulated. Building upon this model, a new handoff technique is proposed by introducing two RSS thresholds and estimated distance verification, anticipating RSS fluctuations that may lead to handoff decision errors. The performance of the proposed handoff mechanism is thoroughly examined using numerical simulations and the acquired results demonstrate promising advantages of this proposed technique.

Abstract The current inefficient utilization of frequency spectrum has alerted regulatory bodies to streamline improvements. Cognitive radio (CR) has recently received considerable attention and is widely perceived as a promising improvement tool in estimating, or equivalently sensing, the frequency spectrum for wireless communication systems. The cognitive cycle in CR systems is capable of recognizing and processing better spectrum estimation (SE) and hence promotes the efficiency of spectrum utilization. Among different SE methods, the multi-taper method (MTM) shows encouraging results. Further performance improvement in the SE for CR can be achieved by applying multiple antennas and combining techniques. This paper proposes a constructive development of SE using MTM, abbreviated as MTSE, and by employing multiple-input multiple-output (MIMO), parsed into separate parallel channels using singular value decomposition (SVD), and maximum ratio combining (MRC) configurations. Deviating from these improvements, however, multicarrier systems such as orthogonal frequency division multiplexing (OFDM) show inferior sensing performances due to the noise multiplicity generated and combined from all subcarrier channels. By means of the quadrature matrix form, the probabilities for such integrated settings of SE have been derived to reach at their approximate asymptotes. Numerical simulations revealed specific better performances stemmed from coupling the fashionable MTSE and MIMO technologies.